By adminPublished On: November 20, 2018Categories: Enviroment

The Bishop, Most Rev. Dominic Yeboah Nyarko, the Priests and Religious, and the entire Catholic Faithful of the Catholic Diocese of Techiman, climaxes the 10th Anniversary celebration of the creation of the Diocese. The Solemn Thanksgiving Mass was well attended by the Bishops of the Ghana Catholic Bishops’ Conference (GCBC), the General Secretary and some Staff of the National Catholic Secretariat, Priests and Religious from Techiman and Sunyani Dioceses and many other dioceses in Ghana, Government Officials, Nana Oseadeayo Akumfi Ameyaw IV, Omanhene of Techiman Traditional Area and his Elders, Chiefs, Professor Christopher Ameyaw Akumfi, who represented the President of the Republic of Ghana, Media men and women, and a great number of the Catholic Faithful from all over the diocese and beyond.

In his homily, the Metropolitan Archbishop of Kumasi, Most Rev. Gabriel Justice Anokye, congratulated the Bishop of Techiman, the Clergy, and the entire people of Techiman for having grown steadily and momentarily in the past 10 years. Reflecting on the readings for the 33rd Sunday in Ordinary Time, the Archbishop exhorted all People of God to discern and be circumspect in believing the many false prophets who have come to confuse Christians in Ghana. He called on all to realize that Jesus Christ is the only King who exists for eternity and for whose account we all exist.

The Most Rev. Dominic Yeboah Nyarko, the Host Bishop and President of the Eucharistic Celebration, used the opportunity to thank all and sundry for their prayers and immense support, in-kind and in cash, for the growth and development of the young Techiman Diocese. He expressed his appreciation to the Bishops of the GCBC for their support and good counsel; and thanked especially the Most Rev. Matthew Kwasi Gyamfi, Bishop of Sunyani and the Diocese of Sunyani, for their contribution to the growth of the Diocese. He thanked the Traditional Leaders in the Diocese who, for the pasts 10 years, have established a harmonious relationship with the Church and have supported the Church with lands for human development. 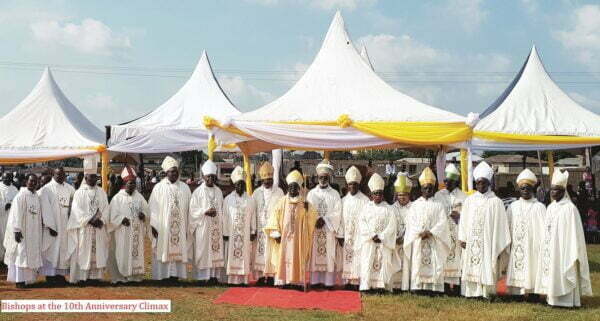 The Bishop of Techiman was also grateful to his Collaborators, the Curia members, and all Priests and Religious, Catechists, Pastoral Council members, lay societies and their leaders, and the entire Catholic Faithful in the Diocese for their great support, dedication, and hard work. Bishop Dominic was particularly grateful to BACCSOD, Mr. Gabriel Justice Addow, Mr. P. Y Fosu, Mr. J. A. Adom, and their families, for their special contribution to the success of the Diocese throughout the past 10 years. The Bishop also thanked Very Rev. Fr. Francis Kwame Anane Yeboah, the Chairman of the Anniversary Planning Committee, and his Team for working so tirelessly to plan and ensure the success of the 10th Anniversary and the Plenary Assembly of the GCBC. 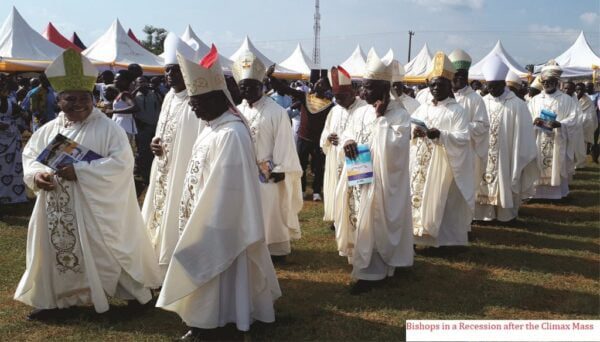 The Bishop, Clergy, Religious, and the entire Catholic Faithful of the Diocese, are eternally grateful to God for the gift of Techiman Diocese and his sustenance throughout the past 10 years. to him be glory forever and ever. We are profoundly grateful to all our benefactors and benefactresses, both home and abroad, and all Donor Agencies. We are grateful to all those whose prayers, presence, and presents have contributed to the success of the 10th Anniversary Celebration. May God who ‘supplies seed to the sower and bread for food, supply and multiply your seed for sowing and increase the harvest of your righteousness (2 Cor. 9:10). May he replenish you all for whatever you have lost for the sake and growth of the Catholic Diocese of Techiman