By adminPublished On: November 17, 2018Categories: Education

GCBC 2019 Plenary Assembly Comes to a Close
The 2018 Plenary Session of the Ghana Catholic Bishops’ Conference (GCBC) has come to a close. In a Solemn Mass held at the St. Paul’s Cathedral Church in Techiman on Friday November 16, 2018, the Bishops of the GCBC, the Secretary General and his Staff at the National Catholic Secretariat, Priests, Religious and laity of the Catholic Diocese of Techiman and beyond, gathered to thank God for the successful end of this year’s Plenary Assembly held in the Catholic Diocese of Techiman from November 9 – 16, 2018. The Mass was presided over by the Most Rev. Philip Naameh, the Metropolitan Archbishop of Techiman and President of the GCBC.

Reading the Communique on behalf of the GCBC, Most Rev. Charles Gabriel Palmer Buckle, the Metropolitan Archbishop of Cape Coast and Apostolic Administrator of Accra Archdiocese, and Vice President of the GCBC, congratulated Most Rev. Dominic Yeboah Nyarko, the Priests, Consecrated Men and Women and the entire Faithful of the Catholic Diocese of Techiman on the occasion of their 10th Anniversary of the creation of the diocese and prayed for the growth of the faith and for the Bishop and his collaborators as they exercise their shepherding roles over the people entrusted to their care. 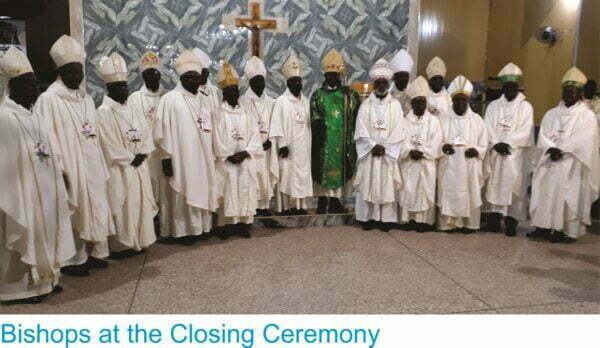 The Communique of the Communique issued by the GCBC at the end of its annual plenary assembly exhorted all Catholic Faitful, All Christians and all Ghanaians to faithfully respond to the call to holiness as enshrined in the Apostolic Exhortation of the Holy Father Pope Francis, Gaudete et Exsultate. They invited all Catholics, and people of good will, to deeply reflect on God’s call to holiness. Indeed, to be called holy people, it is not enough just to know and speak about God. Holiness compels all, especially Christians, to follow the example of Christ, organizing their lives as a participation in the mystery of Christ.

The Communique addressed certain important issues in Ghana that militates against the holiness of the Ghanaian people and called on the Government of Ghana, all leaders in Ghana and the Ghanaian people to do their best to restore the sanity and holiness of Ghana. They tackled issues like Bribery and Corruption, Irregular Migration, Care for Our Environment, Youth Unemployment, Local Government Reforms. They also talked about the current issues affecting the Financial Sector, especially the Banking sector, and called on Government to ensure that due regulations are followed to ensure sanity in the sector. The GCBC expressed concern for the big gap between the rich and Poor in the country. 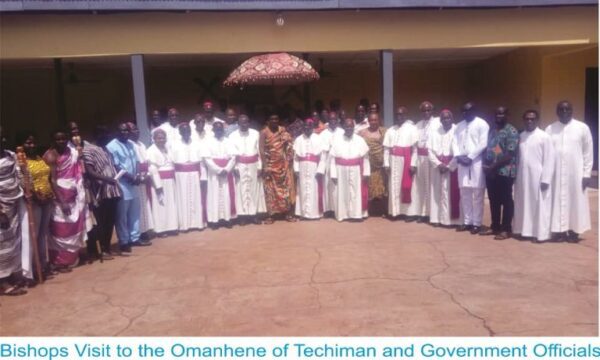 Speaking on the Education Delivery in the Country, the GCBC called on Government urgently not to only praise the Church in public places for her contributions in education, health, agricultural and social services, but to act concretely by signing the Memorandum of Understanding (MoU) regarding the educational partnership and other promises the party made in its own manifesto in 2016. They urged Government not to marginalize the teaching of Religious and Moral Education (RME) in the syllabuses of our Junior and Senior High Schools; And asked for a genuine stakeholders’ engagement in the development of a new educational curriculum for our schools.

The 2018 Plenary Assembly of the GCBC was officially opened on Monday 12th November, 2018 at the Our Lady of the Holy Cross of Calvary Pastoral and Social Center, Asueyi. In his welcome address, the Host Bishop, Most Rev. Dominic Yeboah Nyarko, Bishop of the Catholic Diocese of Techiman, expressed his joy and that of the entire people of Techiman for the historic Conference on the occasion of the 10th Anniversary Celebration of the creation of the Diocese. Telling the story of the Diocese of Techiman, the Bishop outlined the enormous successes chopped by the diocese in the past 10 years.

The Most Rev. Philip Naameh, the Metropolitan Archbishop of Tamale, and President of the GCBC delivered the Keynote Address and thanked the people of Techiman Diocese and the entire Brong Ahafo Region of Ghana, for their immense contribution to the feeing and development of Ghana. He, however, outlined several serious cankers that befall this region. One of such serious problems in the Region is the rate of irregular Migration in the Region. According to the President, records of the Ghana Statistical Service indicated that in 2017. Out of the 4,092 Ghanaians repatriated from Libya in 2017, 1,562 were from the Brong Ahafo Region, precisely Techiman and Nkoranza. He called on all to desist help curb this menace and asked the Government to implement the National Migration Policy.

The Paramount Chief of Techiman Traditional Area, Nana Oseadeayo Akumfi Ameyaw IV, who chaired the occasion thanked and congratulated the GCBC for choosing Techiman for their 2018 Plenary Assembly, which has coincided with the 10th Anniversary celebration creation of Techiman Diocese. He indicated that, should all things work well, the entire area of the Catholic Diocese of Techiman will become the proposed Bono East Region, which the Chiefs and people in this area has petitioned the President of Ghana to create. He therefore called on all people in this are to go out in their number to vote ‘YES’ come 27th December, 2018 when the Referendum for this exercise in opened.